Exercising does two things: It makes you hungry and makes you proud. So let’s say after every workout you eat a huge dinner with extra dessert. You know that’s not ideal, but you just accomplished something hard, so it feels justified.

After a year of this you haven’t lost any weight, which was your goal. You can’t figure it out. You’re exercising every day. You’re so frustrated.

The name for this is “food compensation,” and it’s wily foe. In his book The Body, Bill Bryson writes:

One study in America found that people overestimate the number of calories they burned in a workout by a factor of four. They also then consumed, on average, about twice as many calories as they had just burned off … the fact is, you can quickly undo a lot of exercise by eating a lot of food, and most of us do.

You can’t measure the benefit of exercise just by tracking how much you work out. It’s the gap between your workout and avoiding offsetting its benefits after the fact that makes all the difference.

And isn’t building wealth the same?

Here’s a short story of what happened over the last 50 years: Median inflation-adjusted incomes doubled and the savings rate was nearly cut in the half: 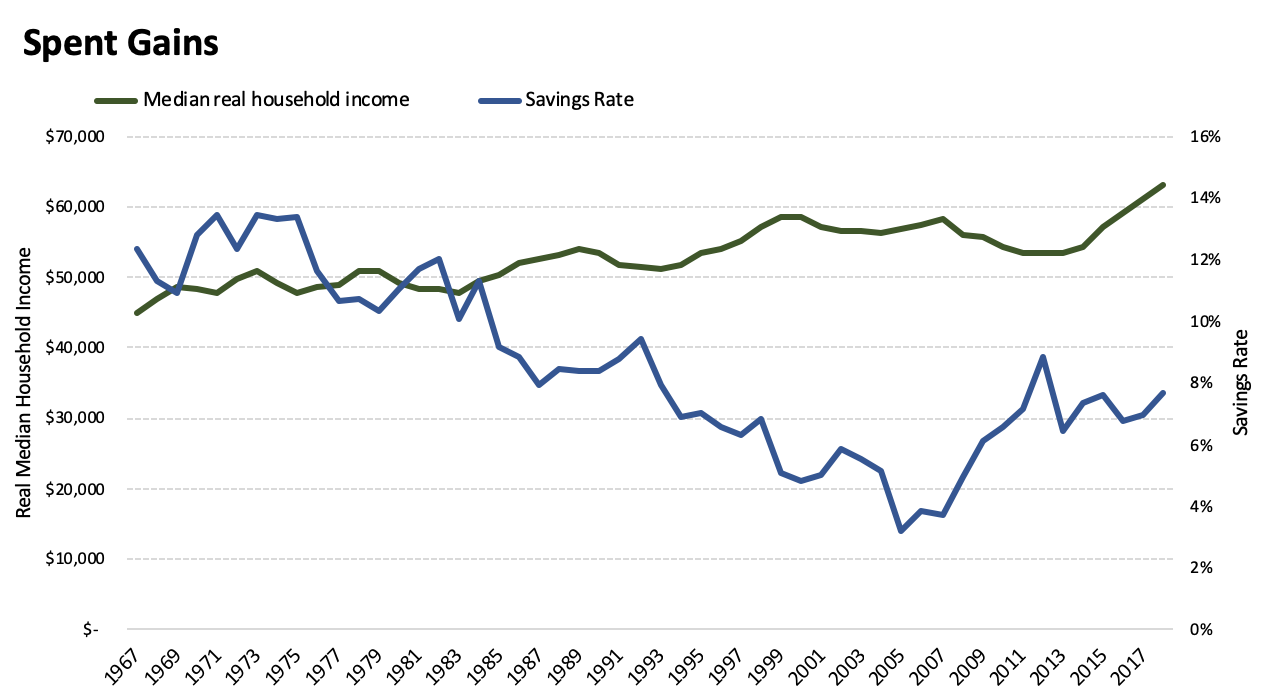 The typical American family is earning more than ever before. But for many it probably doesn’t feel like that – at least as much as it should – because all of the income gains and then some have been offset with higher spending.

You could say higher spending is the goal. But all new luxuries become necessities in due time as expectations reset. I suspect part of the reason people don’t feel better off is because financial progress is better measured by wealth, not income. And wealth is just the accumulation of income you haven’t spent. So a lot of people are the financial equivalent of the exerciser who burns 500 calories then immediately offsets it with dessert and is frustrated by the lack of progress despite working so hard.

I get why it happens. Spending more when your income rises is as tempting as eating more after you exercise. It feels earned and justified. People’s lifestyle expectations are driven by their peers, so when everyone spends more you feel entitled to do the same.

But all wealth relies on the ability to receive an extra dollar and say, “I could spend this, and spending feels great, but I’m not going to.” It’s the same as turning down a big meal after working out, and it’s just as hard. All great things are hard.

Wealth is what you don’t spend, which makes it invisible and hard to learn about by observing other people’s lives. Spending is contagious; wealth is mysterious.

Money is often a negative art. What you don’t do can be more important than what you actively do.