Casualties of Your Own Success

Evolution is good at what it does. And one of the things it does is give animals larger bodies over time.

Edward Drinker Cope was a 19th Century paleontologist. His work, later deemed Cope’s Rule – not universal enough to call a law – tracked the lineages of thousands of species and showed a clear bias towards animals evolving to become larger over time.

Horses went from the size of small dogs to their modern height. Snakes from no larger than a inch to modern boas. Dinosaurs from 3-inch lizards to a brontosaurus. And us: 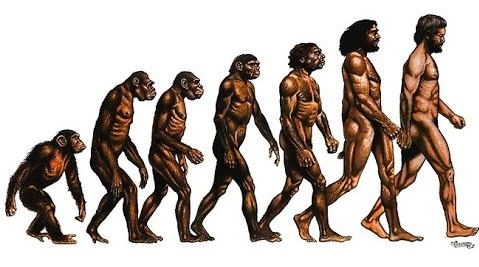 This isn’t surprising. Bigger species are better at capturing prey, can travel longer distances, and support bigger brains. Economies of scale in business is something biology has known for hundreds of millions of years.

The obvious question is, Why hasn’t evolution made every species huge?

Two scientists, Aaron Clauset of the Santa Fe Institute and Doug Erwin of the Museum of Natural History, explained why in a paper that is dense but summed up in a wonderful sentence: “The tendency for evolution to create larger species is counterbalanced by the tendency of extinction to kill” off larger species.

Body size in biology is like leverage in investing: It accentuates the gains but amplifies the losses. It works well for a while and then backfires spectacularly at the point where the benefits are nice but the losses are lethal.

Big animals also require lots of land per capita, which is brutal when land is scarce from farming or natural disaster. They can need more food per unit of body mass than small animals, which is the end game in a famine. They can’t hide easily. They move slow. They reproduce slow. Their top-of-the-food chain status means they usually don’t need to adapt, which is an unfortunate trait when adapting is required.

The most dominant creatures tend to be huge, but the most enduring tend to be smaller. T-Rex < cockroach < bacteria.

Size is nature’s leverage. Sought after for its benefits straight up to the point that it ferociously turns against you.

Citigroup almost went out of business in 2008 because it sold products with liquidity puts. That meant that if debt Citi sold to other investors became illiquid, those investors had the right to sell them back to Citi at face value. When debt markets froze, liquidity puts cost Citigroup $25 billion in losses in 90 days, at a time when it had less than $90 billion in equity.

The most amazing part of this is that, by all accounts, not one person on Citigroup’s senior management team knew what a liquidity put was.

In 2008 Robert Rubin, a former Treasury Secretary and chairman of Citigroup’s executive committee, said he had never heard the phrase liquidity put “until they started harassing Citi last summer.”

But then you have to remember: Citigroup had more employees in 2007 than Miami had residents. It operated in 160 countries – which rounds to “every country” – serving 200 million customers.

There is no scenario in which a company that size can operate without consequential actions happening behind the scene that top management is oblivious to. Any private company Citigroup’s size will have a communication breakdown. There are too many moving parts, gossip channels, and games of telephone for everything to properly flow up the chain of command.

The irony – or tragedy – is that Citigroup’s size was an explicit and rational strategy. Big banks had so many economies of scale: Lower costs of capital, more opportunities to cross sell products, the ability to influence regulations, and a huge balance sheet that let them lend to huger companies. Citigroup grew from $800 billion to $2.2 trillion in assets in six years. The first sentence of its 2005 annual report says its strength was having “the largest distribution capacity of any financial services firm in the world.”

Here again, hidden leverage: Evolution favored Citigroup’s growth but was counterbalanced by nearly killing it off.

Facebook might fall into this category. Network companies only work when they’re huge, and the huger the better. But huge has a downside. I would bet no Facebook senior manager had heard of Cambridge Analytica, or the personality quiz it scraped data from, before most of the damage was done. Five million companies advertise on Facebook.

The same tripping over yourself happens to investment businesses.

A big investment fund rakes in big fees, which lets it attracts better employees. And big funds gain a reputation that makes them more attractive to takeover targets. But size is like gravity to opportunity. Softbank’s $100 billion vision fund is perhaps the highest-profile fund in the world. But the universe of opportunities that can move its needle is more than 90% smaller than a $1 billion fund has access to. When Berkshire Hathaway bought Burlington Northern in 2010, Buffett said it was a good business, but “not as good as some we could buy when dealing with smaller amounts of money.”

Being big also puts a spotlight on you that backfires quickly.

I valeted at a hotel in college. We parked 10,000 cars a month. And we banged one of them up every month, like clockwork. Management found this atrocious. Every few weeks we’d be scolded for our recklessness. But one accident in 10,000 parks is actually pretty good. If you drive twice a day, it’ll take you 14 years to park 10,000 times. One bent fender every 14 years is a driving record your insurance company won’t bat an eye at. The only reason we seemed reckless is because we parked so many cars. Size (or volume) put a negative spotlight on us that being less busy with the same parking skills would have masked. Big companies deal with this too. Chipotle sells half a billion burritos a year. You, at home, washing everything in bleach, could never make one carnitas burrito a day for half a billion days (1.4 million years) and expect to avoid a foodborne illness. But sanitation issues crushed the company five years ago.

The important point here is that these companies didn’t get big because of greed or ego. They got big because economies of scale made them more efficient. Economic evolution pushed them that direction, naturally and rationally, so they could do their job better. Cope’s Rule in action. But that same force pushes them straight up to a level of self-destruction that can undermine all the previous gains, even put them out of business. That sounds crazy, but it’s been happening in nature for hundreds of millions of years. So of course it can happen in Mountain View in 2022.

There are two takeaways, neither of which is “don’t get big.”

One is that everything moves in cycles. You can’t extrapolate the benefits of growth because growth comes attached with downsides that go from annoying at one size to catastrophic at another. Rising valuations that come with investment growth is the clearest example, but it’s everywhere: Headcount, media attention, AUM, and influence have downsides that can eventually grow faster than their benefits. Remembering that volatility is attracted to outlier growth puts many things about business and investing in context.

The second is size is associated with success, success is associated with hubris, and hubris is the beginning of the end of success. Some of the most enduring animals aren’t apex predators, but they’re very good at evasion, camouflage, and armor. They’re paranoid. I always come back to the time Charlie Rose asked Michael Moritz how Sequoia Capital has thrived for three decades, and he said, “We’ve always been afraid of going out of business.” Paranoia in the face of success is extremely hard but in hindsight it’s the closest thing to a secret weapon that exists.

Getting Rich vs. Staying Rich