Risk is How Much Time You Need

One of the craziest things about investing is that you can be wrong half the time and still do well.

Most of your investments can be disappointments as long as a few knock it out of the park.

This is intuitive for high-risk, high-reward investments like derivatives or venture capital.

But the more I dig into it, the more I see it across all kinds of asset classes. The reason we don’t think about it with “safer” asset classes is because it takes so long for it to play out.

They have wildly different risk profiles. Venture is risky, suitable for high net worth and institutional investors. Large-cap stocks are safer, suitable for your grandmother’s retirement account.

But the distribution of returns among both asset classes isn’t all that different.

Most venture-backed startups will fail. A much smaller portion will survive, barely. A tiny portion will do very well, and a literal few will become multi-billion dollar companies.

Correlation Ventures once crunched the numbers are showed what this looks like:

This is why VC is associated with high risk. The hit rate of success is extremely low, and the successful VC is the one who sifts through thousands of companies to find the handful of startups that will hit it big.

But then take large-cap public equities.

J.P. Morgan Asset Management once published the distribution of returns for the Russell 3000 Index from 1980 to 2014.

The skew isn’t that different from VC.

Forty percent of all Russell 3000 stock components suffered a “catastrophic loss” from 1980 to 2014, meaning they lost at least 70% of their value and never recovered. This didn’t discriminate much among industries: 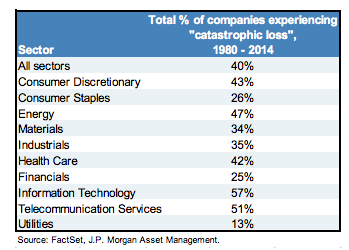 Another 25% of stocks in the index produced returns lower than the overall average, meaning they were a drag on overall returns.

Effectively all of the Russell 3000’s overall returns came from 7% of components that J.P. Morgan called “extreme winners,” which outperformed the overall average by at least two standard deviations (far right column):

So, think about that.

In super-risky VC you either lose money on, or are disappointed in, two-thirds of your investments, and you make basically all of your money on 5% of your holdings.

In safer large-cap public equities, you lose money on, or are disappointed in, about two-thirds of your investments, and you make basically all of your money on 7% of your holdings.

They’re not much different.

But, of course, VC is riskier than public equities.

A VC portfolio can go from a standing start to a point where two-thirds of your companies have whiffed and one or two knock it out of the park in three or four years.

In public equities that same distribution can take 10 or 20 years to play out.

That’s the risk difference between the two asset classes. It’s not how the individual companies perform. It’s the amount of time it takes for those companies to log their performance. VC is just like investing in public equities, but at 5x speed.

The same is true on the upside.

Uber has increased in value two thousand times over in the last eight years, which is staggering. Altria has also increased in value more than 2,000 times over as a public company; it just took 40 years for it to happen. The difference isn’t the magnitude of returns. It’s the time it takes to get there.

If speed is the only differentiating factor, why doesn’t everyone favor VC? Why own public equities at all?

Because five times the speed means five times the chaos, pressure, stress, and cracked emotions in a give year. Five times the amount of asking yourself, “What am I doing? Why did I do that? Does this even make sense?”

If VC generates higher returns than large-cap public equities, it’s not because investors have to endure more risk. They just have to endure about the same amount of risk crammed into a much shorter period. Which is hard. There’s a cost to it. You pay for it, not with money but with worry and doubt.

Yes, VC funds can lose everything, while almost no large-cap equity funds lose everything. But this is also differentiated only by time. Large-cap stocks fell 89% in the early 1930s. Same for much of Europe and Japan after World War II, when previously “safe” assets were obliterated. These events happen to seemingly safe assets; they’re just much rarer than in VC. What might happen to VC once or twice a decade could happen to public equities once or twice a century. Here again: Same deal, just different amounts of time.

Which is to say: The most important question to ask when thinking about risk isn’t how much volatility or upside you’re looking for, but how much time your emotions and goals need for that volatility to and upside to play out.