The Wonders of the Future

On January 12th, 1908, the Washington Post ran a full-page spread called “America’s Thinking Men Forecast the Wonders of the Future.” 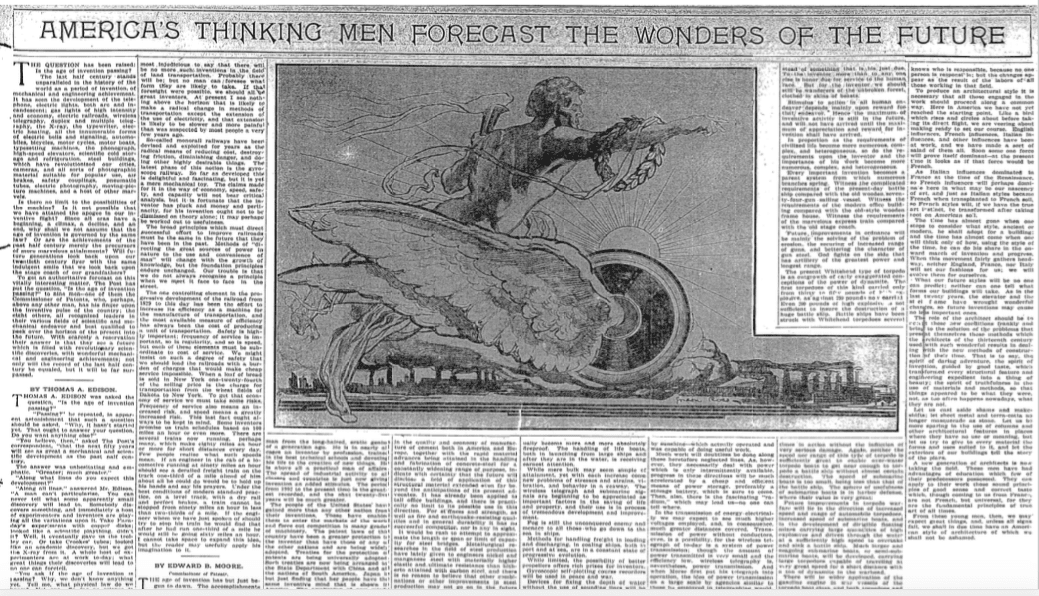 Among the “thinking men” buried in the fine print was Thomas Edison.

Edison had already changed the world at this point, achieving fame something akin to a Steve Jobs of his time.

The Post editors asked Edison a simple question: “Is the age of invention passing?”

His answer was predictable:

“Passing?” he repeated, in apparent astonishment that such a question should be asked.

“Why, it hasn’t started yet. That ought to answer your question. Do you want anything else?”

“You believe, then, that the next 50 years will see as great a mechanical and scientific development as the past half century?” the Post asked Edison.

“Greater. Much greater,” he replied.

“Along what lines do you expect this development?” they asked him.

Edison was one of the greatest inventors of all time because he understood the process of scientific discovery better than almost anyone before him or since. He wasn’t not a grand planner. He was a prolific tinkerer, spending hours in his lab combining parts in ways he didn’t quite understand, confident that little discoveries along the way – both from himself and others – would be combined and leveraged into more meaningful inventions.

No one could ever sit down and invent a lightbulb, and that’s not what Edison did. One person could spend a lifetime discovering the properties of different shapes of glass bulbs. Another could discover how different filaments burned. Another could discover a way to harness electricity. Another how to distribute it. And another – Edison – how to tinker with hundreds of disparate discoveries, tying them all together into a working lightbulb.

The point is that big breakthroughs don’t happen on their own. They are a conglomeration of small discoveries. They are an unforeseen part of talent leveraging itself off hundreds of inventors, often from multiple industries and multiple eras. This fact alone makes them more plausible than they might seem.

It’s why Edison was optimistic about our future.

“You can never tell what apparently small discovery will lead to,” Edison told the Post. “Somebody discovers something and immediately a host of experimenters and inventors are playing all the variations upon it.”

He gave some examples:

Take Faraday’s experiments with copper disks. Looked like a scientific plaything, didn’t it? Well, it eventually gave us the trolly car. Or take Crooke’s tubes; looked like an academic discovery, but we got the X-ray from it. A whole host of experimenters are at work today; what great things their discoveries will lead to, no one can foretell.

“You’re asking if the age of invention is over?” Edison asked. “Why, we don’t know anything yet.”

When the airplane came into practical use in the early 1900s, one of the first tasks was trying to foresee what benefits would come from it. A few obvious ones were mail delivery and sky racing.

Orville and Wilbur Wright never guessed their first flight in Kitty Hawk planted the seed that eventually supplied 11% of the world’s electricity. But that’s exactly what they did. And the designers of the first nuclear power plant had a fairly clear path set for their invention thanks to thousands of discoveries that came before them, including the discoveries of the Wrights – a couple tinkering bicycle repairmen in their 20s.

This is why the wonders of the future are impossible to predict in detail, but their occurrence is highly likely. Small things leading to big things travels down a path that is both complicated and inevitable.

In his book How We Got to Now, Steven Johnson writes:

Innovations usually begin life with an attempt to solve a specific problem, but once they get into circulation, they end up triggering other changes that would have been extremely difficult to predict … An innovation, or cluster of innovations, in one field ends up triggering changes that seem to belong to a different domain altogether.

We’ve seen this in recent years. Google Maps, TurboTax, and Coursera wouldn’t be possible without ARPANET, a 1960s Department of Defense project linking computers to manage Cold War secrets that became the foundation for the Internet. That’s how you go from the threat of nuclear war to filing your taxes from your couch – a link that was unthinkable 50 years ago, but there it is. Internet search wasn’t very good in the 1990s, so Sergey Brin and Larry Page made it better. Their company attracted so much talent and capital that Google is now trying to solve renewable energy and discover immortality. From inefficient web search to immortality in two steps. No one could possibly see that coming 20 years ago.

There is a long history of smart people predicting that the age of invention is over.

Some make convincing arguments that the progress of the 19th and 20th century – clean water, radio, cars, antibiotics – were so massive that we shouldn’t expect to repeat their success, even if we have progress.

Part of the reason scientific pessimism is common is that optimism sounds so implausible.

If you view inventions as a single task – like one person sitting down and inventing a computer, – then the odds of doing it again with something new seem far fetched. You might view the last 100 years of invention as luck, but not something we can count on repeating itself.

But if you view invention as something that happens tiny steps at a time – as Edison pointed out in 1908 – then big inventions seem more plausible.

Will we perfect self-driving cars? Almost certainly. But not from one person’s mind. It’ll be the conglomeration of hundreds or thousands of tiny breakthroughs spliced together. Any individual discovery may seem meaningless by itself – which is what the pessimists see and extrapolate – but when they’re leveraged together they create something miraculous.

On January 12th, 1908 – the same day the Post ran their column with Edison – the first long-distance wireless message was sent in France.

No one could foresee the inventions it eventually seeded, including helping me publish this article 109 years later.