Too Much, Too Soon, Too Fast

Some things scale well. Double their size and you get double the output (or more). Other things don’t, and my God is it important to know which is which.

Let me tell you about Robert Wadlow. He was enormous, the largest human ever known.

A pituitary gland abnormality bombarded Wadlow’s body with growth hormone, leading to staggering size. He was six feet tall at age seven, seven feet tall by age 11, and when he died at age 22 stood an inch shy of nine feet tall, weighed 500 pounds, and wore size 37 shoes. His hand was a foot wide.

He was what fictional stories would portray as a superhuman athlete, capable of running faster, jumping higher, lifting more weight and crushing more bad guys than any normal person. Like a real-life Paul Bunyan.

But that was not Wadlow’s life at all.

He required steel leg braces to stand and a cane to walk. His walk wasn’t much more than a limp, requiring tremendous effort. What few videos of Wadlow exist show a man whose movements are strained and awkward. He was rarely seen standing on his own, and is usually leaning on a wall for support. So much pressure was put on his legs that near the end of his life he had little feeling below his knees. Had Wadlow lived longer and kept growing, casual walking would have caused leg bones to break. What actually killed him was nearly as grim: Wadlow had high blood pressure in his legs due to his heart’s strain to pump throughout his enormous body, which caused an ulcer, which led to a deadly infection.

You can’t triple the size of a human and expect triple the performance – the mechanics don’t work like that. Huge animals tend to have short, squatty legs (rhinos) or extremely long legs relative to their torso (giraffes). Wadlow grew too large given the structure of the human body. There are limits to scaling.

Writing before Wadlow’s time, biologist J.B.S. Haldane once showed how many things this scaling issue applies to.

A flea can jump two feet in the air, an athletic human about five. But if a flea were as large as a man, it would not be able to jump thousands of feet – it doesn’t scale like that. Air resistance would be far greater for the giant flea, and the amount of energy needed to jump a given height is proportional to weight. If a flea were 1,000 times its normal size, its hop might increase from two feet to perhaps six, Haldane assumed.

Look around and this concept is everywhere, in every direction. Haldane wrote:

A man coming out of a bath carries with him a film of water of about one-fiftieth of an inch in thickness. This weighs roughly a pound. A wet mouse has to carry about its own weight of water. A wet fly has to lift many times its own weight and, as everyone knows, a fly once wetted by water or any other liquid is in a very serious position indeed.

Eyes are similar. Vision occurs when light hits rods and cones in the back of your eyes. The rods and cones are roughly the diameter of a lightwave. They cannot be smaller, because an image can’t be defined in a unit smaller than a wave of light, or larger, as vision detail would diminish. Animals with tiny eyes, like mice, tend to have poor vision with rods and cones the same size as ours, just fewer of them. Then, beyond a certain size, gains diminish. An African elephant weighs 14,000 pounds and its eyes are 3.5 centimeters wide. An adult human might weigh one-hundredth as much and its eyes are … 3 centimeters wide.

“For every type of animal there is a most convenient size, and a change in size inevitably carries with it a change of form,” Haldane wrote.

A most convenient size.

A proper state where things work well, but break when you try to scale them into a different size or speed.

Which, of course, also applies to business and investing.

A good summary of investing history is that stocks pay a fortune in the long run but seek punitive damages when you try to be paid sooner.

Virtually all investing mistakes are rooted in people looking at long-term market returns and saying, “That’s nice, but can I have it all faster?”

Here’s how often the market generates a positive return based on holding period. 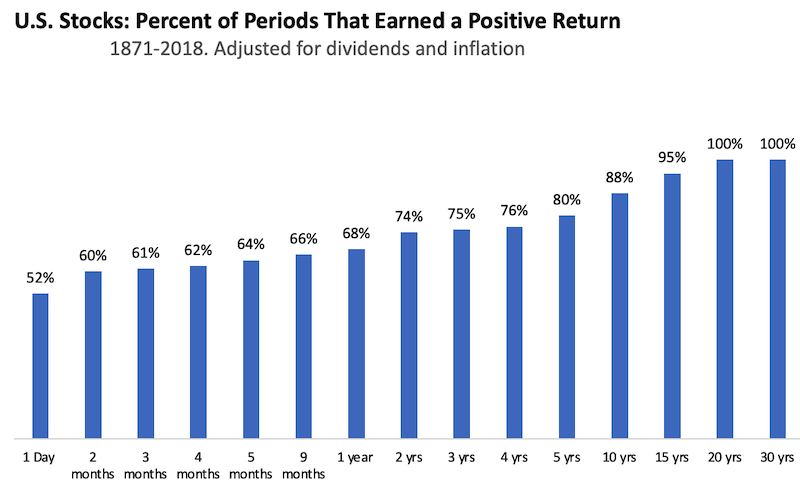 One way to think of this chart is that there’s a “most convenient” investing time horizon – probably something around ten years. That’s the period in which markets are nearly always to reward your patience. The more your time horizon compresses the more you rely on luck and tempt ruin.

Go down the list of investing blunders and I’m telling you, no less than 90% of them are caused by investors trying to compress this natural, “most convenient,” time horizon.

The same thing happens to companies.

One thing led to another. The need to hit growth targets eventually elbowed out rational analysis. Examples of Starbucks saturation became a joke. Same-store sales growth fell by half as the rest of the economy boomed.

Howard Schultz wrote senior management in 2007: “In order to go from less than 1,000 stores to 13,000 stores we have had to make a series of decisions that, in retrospect, have led to the watering down of the Starbucks experience.” Starbucks closed 600 stores in 2008 and laid off 12,000 employees. Its stock fell 73%, which was dreadful even by 2008 standards.

Schultz wrote in his 2011 book Onward: “Growth, we now know all too well, is not a strategy. It is a tactic. And when undisciplined growth became a strategy, we lost our way.”

There was a most convenient size for Starbucks – there is for all businesses. Push past it and you realize that revenue might scale but disappointed customers scale faster, in the same way Robert Wadlow became a giant but struggled to walk.

(Schultz once reportedly told former WeWork CEO Adam Neumann to slow down growth and focus on quality metrics, to which Neumann responded, “F*ck that.” Some people learn this the hard way.)

M&A is the same. Growth by acquisition often occurs when management wants faster growth than customers think the business deserves. The customer’s desire is likely closer to the “most convenient” size of a business, and force-feeding beyond that point leads to all kinds of disappointment.

Same for corporate culture. Nassim Taleb says he’s a libertarian at the federal level, a republican at the state level, a democrat at the local level, and a socialist at the family level. People handle risk and responsibility in totally different ways when a group scales from four people to 100 to 100,000 to 100 million. In the same way, a management style that works brilliantly at a 10-person company can destroy a 1,000-person company, which is a hard lesson to learn when some companies grow that fast in a few short years. Travis Kalanick at Uber may be the best example. No one but him was capable of growing the company early on, and anyone but him was needed as the company matured. I don’t think that’s a flaw; just a reflection that some things don’t scale.

I’ll end with an investing story I think about all the time.

Everyone knows the investing duo of Warren Buffett and Charlie Munger. But 40 years ago there was a third member, Rick Guerin. The three made investments together. Then Rick kind of disappeared while Warren and Charlie became the most famous investors of all time.

A few years ago hedge fund manager Mohnish Pabrai asked Buffett what happened. Rick, Buffett explained, was highly leveraged and got hit with margin calls in the 1970s bear market.

Charlie and I always knew that we would become incredibly wealthy. We were not in a hurry to get wealthy; we knew it would happen. Rick was just as smart as us, but he was in a hurry.

Too much, too soon, too fast.

Respect the most convenient state.

Check out my book, The Psychology of Money.