When You Change the World and No One Notices

Do you know what’s happening in this picture? Literally one of the most important events in human history.

But here’s the most amazing part of the story: Hardly anyone paid attention at the time.

Wilbur and Orville Wright conquered flight on December 17th, 1903. Few inventions were as transformational over the next century. It took four days to travel from New York to Los Angeles in 1900, by train. By the 1930s it could be done in 17 hours, by air. By 1950, six hours.

Unlike, say, mapping the genome, a lay person could instantly grasp the marvel of human flight. A guy sat in a box and turned into a bird.

But days, months, even years after the Wright’s first flight, hardly anyone noticed.

Here’s the front page of The New York Times the day after the first flight. Not a word about the Wrights:

Two days after. Again, nothing:

Three days later, when the Wrights were on their fourth flight, one of which lasted nearly a minute. Nothing:

This goes on. Four days. Five days, six days, six weeks, six months … no mention of the men who conquered the sky for the first time in human history.

The Library of Congress, where I found these papers, reveals two amazing details. One, the first passing mention of the Wrights in The New York Times came in 1906, three years after their first flight. Two, in 1904, the Times asked a hot-air-balloon tycoon whether humans may fly someday. He answered:

That was a year after the Wright’s first flight.

In his 1952 book on American history, Frederick Lewis Allen wrote:

Several years went by before the public grasped what the Wrights were doing; people were so convinced that flying was impossible that most of those who saw them flying about Dayton [Ohio] in 1905 decided that what they had seen must be some trick without significance – somewhat as most people today would regard a demonstration of, say, telepathy. It was not until May, 1908 – nearly four and a half years after the Wright’s first flight – that experienced reporters were sent to observe what they were doing, experienced editors gave full credence to these reporters’ excited dispatches, and the world at last woke up to the fact that human flight had been successfully accomplished.

The Wrights’ story shows something more common than we realize: There’s often a big gap between changing the world and convincing people that you changed the world.

Invention requires a long-term willingness to be misunderstood. You do something that you genuinely believe in, that you have conviction about, but for a long period of time, well-meaning people may criticize that effort … if you really have conviction that they’re not right, you need to have that long-term willingness to be misunderstood. It’s a key part of invention.

It’s such an important message. Things that are instantly adored are usually just slight variations over existing products. We love them because they’re familiar. The most innovative products – the ones that truly change the world – are almost never understood at first, even by really smart people.

It happened with the telephone. Alexander Graham Bell tried to sell his invention to Western Union, which quickly replied:

This `telephone’ has too many shortcomings to be seriously considered as a practical form of communication. The device is inherently of no value to us. What use could this company make of an electrical toy?

It happened with the car. Twenty years before Henry Ford convinced the world he was onto something, Congress published a memo, warning:

Horseless carriages propelled by gasoline might attain speeds of 14 or even 20 miles per hour. The menace to our people of vehicles of this type hurtling through our streets and along our roads and poisoning the atmosphere would call for prompt legislative action. The cost of producing gasoline is far beyond the financial capacity of private industry… In addition the development of this new power may displace the use of horses, which would wreck our agriculture.

It happened with the index fund – easily the most important financial innovation of the last half-century. John Bogle launched the first index fund in 1975. No one paid much attention to for next two decades. It started to gain popularity, an inch at a time, in the 1990s. Then, three decades after inception, the idea spread like wildfire. 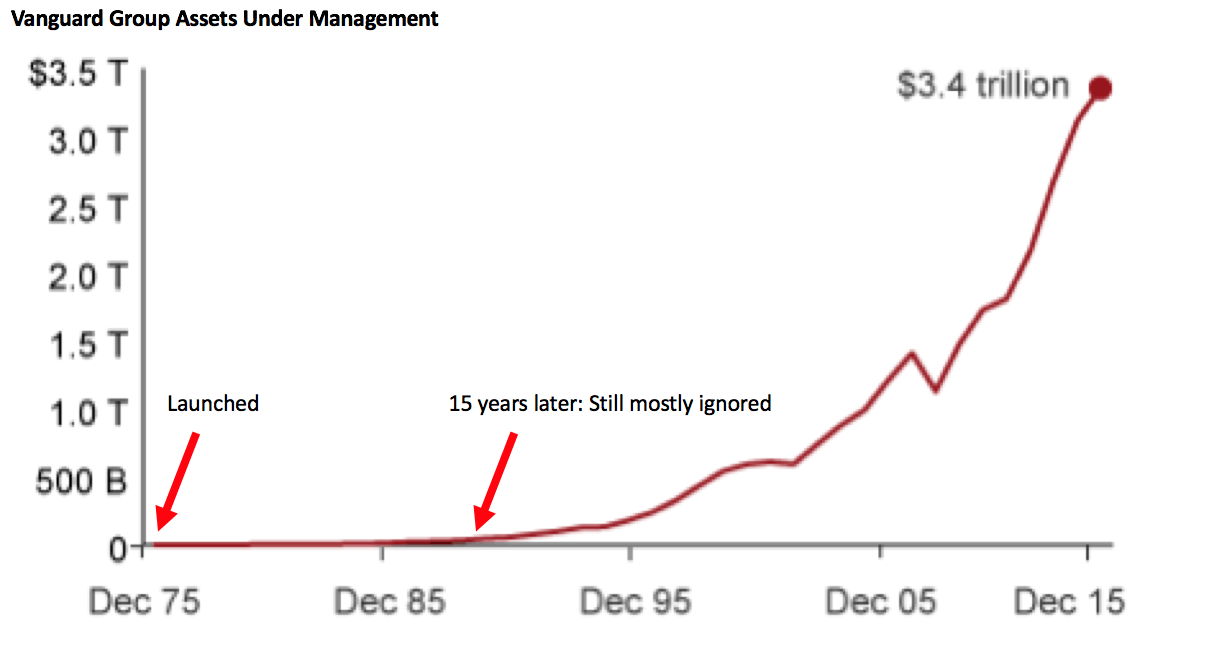 It’s happening now, too. 3D printing has taken off over the last five years. But it’s hardly a new invention. Check out this interview with the CEO of 3D Systems in … 1989. 3D printing, like so many innovations, had a multi-decade lag between invention and adoption. Solar is similar. Photovoltaics were discovered in 1876. They were commercially available by the 1950s, and Jimmy Carter put solar panels on the White House in the 1970s. But they didn’t take off – really take off – until the late 2000s.

This process can take decades. It rarely takes less than several years.

Three points arise from this.

It takes a brilliance to change the world. It takes something else entirely to wait patiently for people to notice. “Zen-like patience” isn’t a typical trait associated with entrepreneurs. But it’s often required, especially for the most transformative products.

When innovation is measured generationally, results shouldn’t be measured quarterly. History is the true story of how long, messy, and chaotic change can be. The stock market is the hilarious story of millions of people expecting current companies to perform quickly, orderly, and cleanly. The gap between reality and expectations explains untold frustration.

Invention is only the first step of innovation. Stanford professor Paul Saffo put it this way:

It takes 30 years for a new idea to seep into the culture. Technology does not drive change. It is our collective response to the options and opportunities presented by technology that drives change.