But not all decline is the same. To understand what’s happening, and what might happen in the future, it helps to distinguish between three main types of decline.

This is a picture of Times Square on New Year’s Eve 2007: 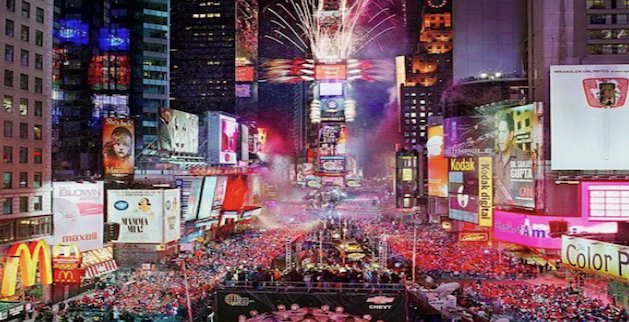 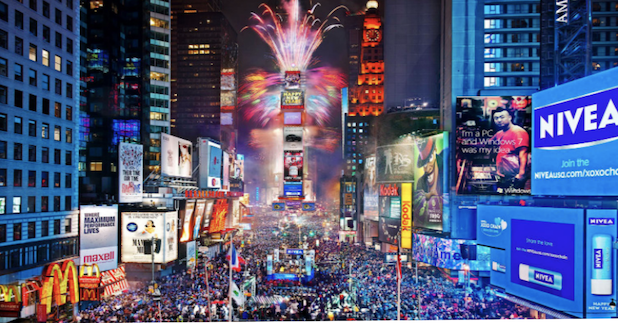 Do you see the difference?

No, of course you don’t. There’s … no meaningful difference between the two.

The people had the same degrees, the same ideas, the same knowledge, the same books, the same manuals, medicine, and manufacturing capacity in the first picture than in the second.

Same thing if you looked virtually anywhere across the world during those two times.

But America became $16 trillion poorer during that time.

Its stock market was worth half as much in the second picture than in the first.

What happened between 2007 and 2009 was narrative decline.

In 2007, we told a story about the stability of housing prices, the prudence of bankers, and the ability of financial markets to accurately price risk. In 2009 we stopped believing that story. That’s all that changed.

Once the narrative that home prices will keep rising broke, mortgage defaults rose, then banks lost money, then they reduced lending to other businesses, which led to layoffs, which led to less spending, which led to more layoffs, and on and on. Other than clinging to a new narrative, we had an identical – if not greater – capacity for wealth and growth in 2009 as we did in 2007. Yet the economy suffered its worst hit in 80 years.

Narrative decline is what happens when a person, company, or country has the same capabilities as before, but experiences a sudden shift in the stories we tell ourselves. Those stories are the main driver of our ability to use the abilities we have at our disposal. Narrative shifts determine whether we ignore, utilize, or leverage the assets we have, even when there’s no real change to those assets.

Narrative shifts dominate the economy. They’re incredibly powerful, and change the world. But when the economy surges and then tanks, we should remember what’s happening: not a shift in our ability or capacity. Just a shift in what we believe. And what we believe will be different in the future than it is today. The story’s always changing.

Here’s Dresden Germany before and after World War II: 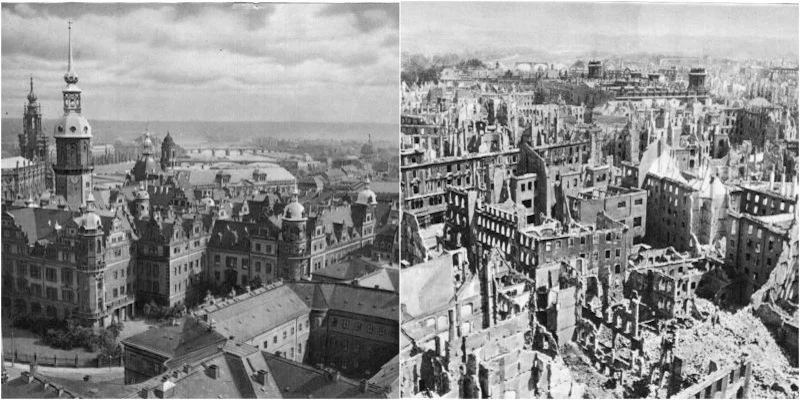 This is totally different than narrative decline. It’s actual loss of what you’re capable of doing – from machinery to infrastructure – and, tragically, people. Same thing with damage from hurricanes, tornadoes, earthquakes, etc.

A few things are important about physical decline.

One is that the rebuilding that typically follows physical decline can deliver a faster and more powerful economic boost than you’d see if the economy were hit with a purely narrative decline. Normal economic growth tends to be incremental, because new ideas have to be slowly proven out, and new sources of demand are marginal and fleeting. But rebuilding what you already needed and lost is a sudden slam of activity. Physical declines can be devastating and occur in a literal instant. The economic growth that follows can be huge, which is hard to predict if you’re thinking about growth through the lens of normal growth.

Another has to do with inflation, particularly runaway bouts of hyperinflation. Inflation, as any Econ 101 student will tell you, is caused by too much money chasing too few goods. But it’s the second part of the equation – too few goods – that lights inflation up. Most cases of hyperinflation occur in countries whose capacity to make stuff was destroyed, usually by bombs or governments shutting down industries by force.

Third, physical decline includes people. Losing your people – whether it’s because they quit your company or leave your country or, in the worst cases, are killed – is the kind of loss that’s hardest to recover from. Many of the smartest German scientists and engineers saw what was happening to their country in the 1930s, and left. As Albert Einstein and his family fled Germany in 1932, he told his wife, “Turn around, you will never see it again!” That’s permanent loss. When it happens to companies, decline can spiral quickly.

This is what happens when you want to keep going but reach a point of no return.

There’s a topic in statistics called “absorbing barriers.” It’s a point when, if reached, shuts down all potential of future activity. Nassim Taleb explains it like this:

An absorbing barrier is a point that you reach beyond which you can’t continue. You stop. So, as Warren Buffett keeps saying, in order to make money, you must first survive. It’s not like an option. It’s a condition. So, once you hit that point, you are done. You are finished. And that applies in the financial world to what we call financial ruin.

This is so important in investing, because the most important part of every investment strategy is enduring the times when your strategy isn’t working. If you can’t endure the bad times the good times are irrelevant, because you’ll experience loss without any chance of recovery.

What the last few weeks mean for businesses and investors varies by how close it pushes you to an absorbing barrier.

If you can ride it out, it’s a personal version of narrative decline. Maybe the story changes a bit. If it pushes you to shutting down, or giving up, or running out of cash, it’s something totally different. The story might end. That’s an unforgiving type of decline, and one that has to be distinguished as a different kind of risk than narrative or some physical declines, where there’s at least a hope of recovery.