To wrap your head around how good we are at solving hard problems with simple solutions, consider how much of a mathematician you need to be to catch a baseball.

What do you need to do to see a ball fly through the air, run to its location, and extend your hand to the exact spot it’s going to land?

The formula necessary to know how to catch a ball looks like this: 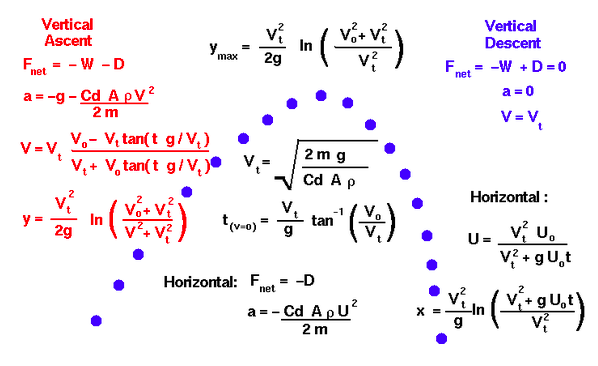 Stephen Hawking could not do this math in under five seconds. But Lenny Dykstra did, thousands of time.

No one actually does the math, of course. Everyone catching a baseball uses a rule of thumb that incorporates all the complicated math into a three-step action:

Every bit of the complex formula is buried in that rule of thumb. People take an impossibly complicated action and distill it into a manageable action that does a good enough job. And it’s not only good enough, it’s the best action, because trying to get more accurate – Lenny Dykstra with a radar gun and a calculator – isn’t a marginal improvement on the good-enough strategy. It’s a blundered stumble into a new strategy with little chance of success.

I love this example because it applies to almost anything complex. If you’re going to act on a problem that is monstrously complex and uncertain, the stripped-down, rules-of-thumb response is not only good enough. It can be superior to tripping over yourself in pursuit of something that appears marginally more accurate.

Chess players do this too.

Adriaan de Groot studied chess masters in the 1960s. He was one himself. He wanted to pinpoint traits that separate good players from extraordinary ones.

de Groot knew that what made a chess master had to be something soft and instinctual like psychology, rather than hard and learned like math, if only because there are more 12-year-old chess prodigies than there are 12-year-old physics pioneers.

After four moves apiece there are a quarter trillion possible chess combinations. No one, of course, can calculate a meaningful percentage of them. So the masters don’t even try. In his book Thought and Choice in Chess, de Groot showed that pretty good chess players attempt to calculate multiple moves in their head, while masters simply contextualize moves into a broad, rules-of-thumb strategy that zeros in on the board’s top few challenges. He wrote:

Although master level players – as one would expect – more often selected winning moves than lesser players, their thinking and decision making followed similar procedural lines. The main difference between grandmasters and players of average strength is the speed of recognizing the central issue in each position. Where lesser players tend to spend considerable time on unimportant options, the best players almost immediately see what the real problem is. That’s their talent. … knowledge and experience rather than a strong computational competence or an exceptional memory.

Chess masters are basically running with the ball in their gaze, while amateurs attempt to calculate the ball’s trajectory.

It seems counterintuitive that the masters take a humbler approach than amateurs. But we see it all the time.

We see it in investing, where dollar cost averaging with index funds beats most active strategies. Indexing is not dumbed down or giving up. It’s a rule-of-thumb approach that incorporates the complexities of diversification, weighting, power laws, bear-market predictions, and portfolio selection into a run-with-the-ball-in-your gaze strategy.

We see it in business, where pretty good products that are consistent can be superior to those constantly trying to improve on the past version. Familiarity captures a lot of the complexities of what consumers want.

We see it in management, where Google found that SAT scores had no predictive ability on an employee’s future performance, but being well-liked by your coworkers does. “People like working with me” is a rule of thumb that can capture the complexities of someone’s technical ability, work ethic, and problem-solving capabilities better than more complex metrics.

Charlie Munger was once asked why more people haven’t copied Berkshire Hathaway’s strategy. “More investors don’t copy our model because our model is too simple,” he said. “Most people believe you can’t be an expert if it’s too simple.”

Berkshire’s model is actually massively complex. But Buffett and Munger have distilled it down to a handful of rules of thumb, acquired over decades of experience, that appear simple yet capture some of the most complex attributes of business and market behavior. By choosing rules of thumb over an attempt at mastering complexity, they’ve actually been able to execute on the strategy in an industry where others trip over themselves.

If you’re going to act in a field with complexity and uncertainty, man, act like that.

There are few practical takeaways to the rule-of-thumb-vs.-complexity approach.

One is accepting the difference between an expectation and a forecast. An expectation is the belief that certain events will occur over time. Rule of thumb: Expect one or two recessions per decade. A forecast is a complex attempt to merge expectations with the calendar: Expect a recession in Q3 2018. They are totally different things. An expectation forces you to prepare for an inevitability without requiring near-term actions – often counterproductive – that forecasts push you towards. Try surrounding yourself with more expectations and fewer forecasts.

Another is realizing that using rules of thumb frees up time compared to digging into complex solutions, and that time can be spent learning about even more helpful rules of thumb. Munger again: “How did Berkshire’s track record happen? If you were an observer you’d see that Warren did most of it sitting on his ass and reading.” The key is that he’s had the time to sit on his ass and read because he hasn’t been bogged down by trying to control the minute details of his strategy. Rules of thumb give you time to learn, and learning gives you rules of thumb.

Most important is accepting that when you’re dealing with uncertainty and complexity, simple ideas are not dumbed-down ideas. They are often complex solutions gift wrapped for you in a way that makes their application practical and sustainable.